Some very articulate and well-reasoned write-ups about The Big R’s were online before the room had even stopped spinning for me, following a very boozy post- event debrief.

My first thought, was Tea! My second- that some people need to get out more! But as the fog of hangover cleared, the need to put my own reflections into writing began to play on my mind.

In the week following Manchester, #TheBigR’s was riding high on twitter. It genuinely felt like a buzz, (much greater than the first 2 events) had been created. The movement for change was picking up pace, and support beginning to snowball.

I searched for a unique angle to write from, but inspiration failed me.

The Reform.Physio website was launched, and I desperately wanted to put into words what it meant to be part of it all before the dust had settled. I wanted to capture the vibe of the weekend, the feeling of hope and the sense of fun (all too often lacking in our profession).

But life is busy, added to which, epic levels of procrastination and here I am, a month later, finally putting fingers to keyboard to share my thoughts.

So how do things look four weeks on?

My twitter feed is no longer dominated by #TheBigR’s. I am no longer experiencing that post event high. It’s back to reality. My surroundings are no longer a modern conference suite, with fresh coffee on tap at every break, but a jaded, windowless clinic room (and often no milk, never mind a fresh brew).

I am tired and dare I say a little frustrated following some challenging clinics.

My angle, it seemed, was to be More NHS specs than rose tinted conference glasses!

I must stress however, it’s not all doom and gloom. Challenging isn’t necessarily bad. I’ve had some very rewarding conversations with both colleagues and patients in recent weeks around changing the way we approach healthcare and think about pain. But a number of twisted hips, high demand for scans and expectations of quick and easy fixes has brought home the enormity of what ‘Reforming MSK practice’ really means.

But no one said it was going to be easy. Despite the positivity generated in Manchester I think everyone in that room was acutely aware we are set for an uphill battle.

I heard echo’s of Erik Meira’s discussion around load, as I tried to convince a patient that they hadn’t failed Physio, (maybe Physio had failed them) having previously only been offered passive treatments and substandard exercise prescription.

Neil Langridge gave an excellent, well-reasoned and balanced keynote about manual therapy in modern practice, but you can bet that the physiotherapist who had frightened a lady into inactivity with the idea her pelvis was ‘going out’ wasn’t at The Big R’s to hear it.

I considered the expert patients, Joletta, Pete and Adrian who had each eloquently narrated their journey, and while I vowed to listen more, back to back appointments meant one eye is inevitably, always on the clock.

There were many more thought provoking talks, discussions and comments over the two days (and if you haven’t already, I would urge you to sign up for the videos). But my reflections began to take me beyond the conference this October and my current workload, and back to that first meeting of minds in Birmingham last year. I pondered how much my circumstances and consequently my perspective have changed and developed (and continue to do so) in the last 12 months as a result of The Big R’s.

Any dreams I may have had of creating change from my small practice in Devon are gone, broken by the harsh reality of public healthcare. But they have been replaced with something much more concrete, more tangible, a working group, manifesto, a community of like-minded people.

The one thing that has helped galvanise my thoughts during this tumultuous time was being invited to sit on a panel in Manchester, discussing the biopsychosocial. Not simply because of Jo Gibson’s  brilliant keynote speech, but preparation for my own contribution forced me to think much wider on the topic. It made me realise that our current scope of practice is too narrow, and we are often paying lip service to the model. People and pain are complex, and it isn’t just the individual we are dealing with, but society at large. We need to be better at collaborating with other agencies. We need to think beyond our own profession if we are to truly provide impact. Educators, town planners, marketing experts (amongst others) are all valuable allies in our quest.

Reform, it would seem, brings Responsibilities. To change physiotherapy is to change not only wider healthcare, but also society.

Whilst I believe the process of evolution should be considered and collaborative, not reactive or rushed, current methods of practice are in danger of being deemed irrelevant in a rapidly changing landscape. Prevention before cure, lifestyle before medicine, social prescribing over that of opioids. Is the current system fit for purpose?

Our goal is one of Everest proportions, and our starting point is well below sea level. But, as the saying goes, a journey of a thousand miles begins with just one step.

If we don’t take those first steps now, we risk not merely stagnation, but extinction.

So keep #TheBigR’s at the front of your mind, and trending on Twitter. Keep thinking outside of the clinic, and looking for ways in which our knowledge and skills can impact society.

And on the days when it all feels too much, brew yourself some fresh coffee, take a moment, look towards the summit, and push on. 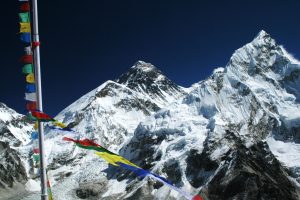